Cornelia Brown Smith Magruder is the acknowledged founder of Rockledge Presbyterian Church. She was the daughter of a Presbyterian minister, a teacher, and a published author. She was the former Miss Cornelia Brown Smith, of Quitman, Georgia, and, according to the history of Coweta County, Georgia, she was graduated in 1863 from College Temple, Hawkinsville, Georgia.  In 1870, at the age of 25, she and her household, spanning three generations, homesteaded on the banks of the Indian River just south of the present-day Magruder Avenue. They built a log cabin, as all homesteaders did, until they could build a permanent dwelling.  Her husband, Major Cephas Bailey Magruder (CSA), brought the family south in the aftermath of the Civil War.

The first church building was located in the Magruder back yard and was used as a school during the week.  It is said by some of the descendants of early pioneers in Brevard County that, in the early days, when the Indians rode up and down the river in canoes, there stood on the same spot on which the first church was erected, a one-room cabin of palmetto logs in which the children of Presbyterian parents attended Sunday School on Sundays and school on week days.  However, the first recorded date of the Rockledge Presbyterian Church is 1877, when Mrs. Magruder began the solicitation of funds for the erection of a Presbyterian Church in Rockledge.

On Sunday, May 25, 1884, St. Johns Presbytery gave sanction for a Presbyterian Church to be organized in Rockledge. Five adults formed a church on the principles of faith and Presbyterian Church order. A visiting minister delivered the sermon, and the Lord's Supper was administered.

An early photograph of the first Rockledge Presbyterian Church.

By the late 1890's and early 1900's, Rockledge had become a winter-resort of note. Mr. Flagler's railroad terminus was at Rockledge for a short time. Three large hotels were located in the vicinity of our present church building. The patrons of these hotels and the hotels themselves played a part in the history of Rockledge Presbyterian Church. 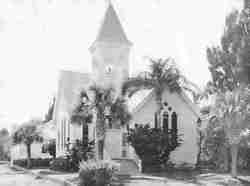 Presbyterian Church.  Calvin Hall was the first structure built.  Later, the Sanctuary, Knox Hall and the Annex were added to complete our present complex.

In over 100 years we have outgrown three church buildings, boosted our membership from five to more than five hundred, and nurtured many individuals in Christian love and fellowship.


Pastor Mike is a native of North Carolina. ... (more)


We at Rockledge Presbyterian... (more)